America has a new hero!

Members of the Cirlot team at NBAA with Shaesta Waiz and Bill Hampton (back row), formerly with
Embry-Riddle.

Capt. Shaesta Waiz has set the stage for aspiring pilots everywhere. On October 4, 2017, Shaesta became the youngest female pilot ever to fly around the world, solo, in a single-engine plane.

At Cirlot, we fell in love with Shaesta when she was pursuing her master’s degree at Embry-Riddle Aeronautical University. She shared with us her dream of accomplishing this goal and the true reason why she embarked on this remarkable endeavor – to inspire young girls around the world to pursue their dreams. 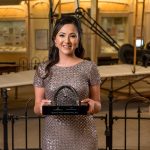 To garner support, Shaesta established Dreams Soar, Inc., a non-profit organization run by volunteers who embraced her vision, enthusiasm and commitment to inspiring girls and young women worldwide to dream big, and achieve more, especially in the fields of aviation and STEM. As the first certified civilian female pilot from Afghanistan, Shaesta took time during her 145-day mission to share her story of perseverance with students around the world and to support STEM education. The Cirlot Agency had the honor of supporting her journey through media relations, as she touched down in each country.

On March 27th of this year, Shaesta was honored by the Smithsonian National Air and Space Museum with one of two annual Trophy awards given to individuals who have contributed outstanding excellence in aerospace.

Keep Shaesta Waiz on your radar. She is just beginning to soar!